As we have understood in Top Candlesticks Part 1 some candlestick patterns work better than others, so let’s continued with the best performers.

Simply invert the Hammer pattern and you get the Inverted Hammer and the Shooting Star patterns.

These two candlesticks have the same shape and the only difference is where you find them: the Inverted Hammer is usually located at the end of a downtrend, the Shooting Star instead is found at the end of a uptrend.

The Shooting Star is a bearish pattern: the buyers who bought at higher prices are then forced to sell off and create high selling pressure.

1. In a downtrend, buy above the Inverted Hammer pattern for a reversal play after bullish confirmation.

2. In a uptrend, sell below the Shooting Star pattern for a reversal play. 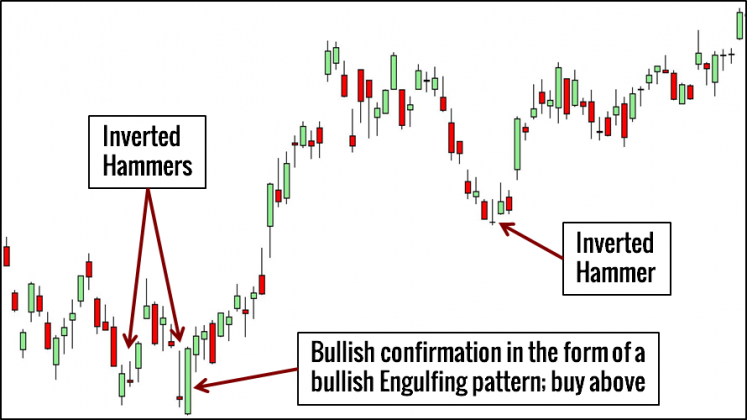 This is a two-candle reversal pattern: on day 1 selling pressure is high, sellers and short sellers are in control and the long candle closes near the bottom of the range; on day 2 there is another long candle but in the opposite direction, starting even lower than the previous close and closing at least halfway into the prior candle.

The short sellers who shorted the stock on day 1 are in a loss on day 2; most of them will cover creating a buying pressure and a potential reversal situation.

The first candlestick of the Piercing Line pattern is bearish.

• opens below the low of the first candlestick; and

• closes above the mid-point of the first candlestick.

The Dark Cloud Cover is the equivalent bearish version of the Piercing candlestick pattern.

• Opens above the high of the first candlestick, and

• Closes below the mid-point of the first candlestick.

In both patterns, the second candle opens with a gap away from the close of the first bar. Hence, these candlestick patterns are unusual in intraday time-frames where gaps are uncommon. 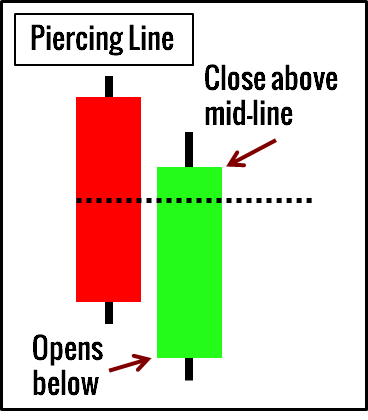 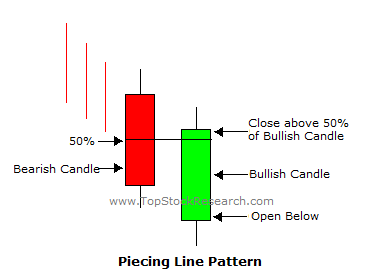 It means some traders are clearly disappointed.

In the Piercing Line pattern, the second bar opened with a gap down, giving an initial hope of a strong bearish follow-through.

However, not only did the bearishness fail to materialise, it proceeded to erase more than half of the bearish gains from the first bar. This bullish shock offers a great long trade.

Likewise in the Dark Cloud Cover pattern, the first gap up prompted hope from the bulls before the lower close crushed it.

1. Find major bullish reversals with the Piercing Line pattern (preferably after a break of a bear trend line)

These are both three-candle patterns.

A star is a candlestick with a small body that does not overlap with the preceding candle body. Since the candle bodies do not overlap, forming a star will always involve a gap. Thus, it is uncommon to find Morning Stars and Evening Stars in intraday charts. 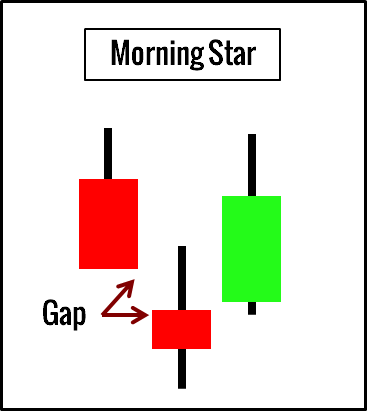 A Morning Star is a set of the following candles (in sequence):

2. A star below it (either bullish or bearish)

3. A bullish candlestick that closes within the body of the first candlestick

The first candlestick in the Morning Star pattern shows the bears in control. The star hints at a transition to a bullish market.

Finally, the strength of the last candlestick confirms the bullishness. 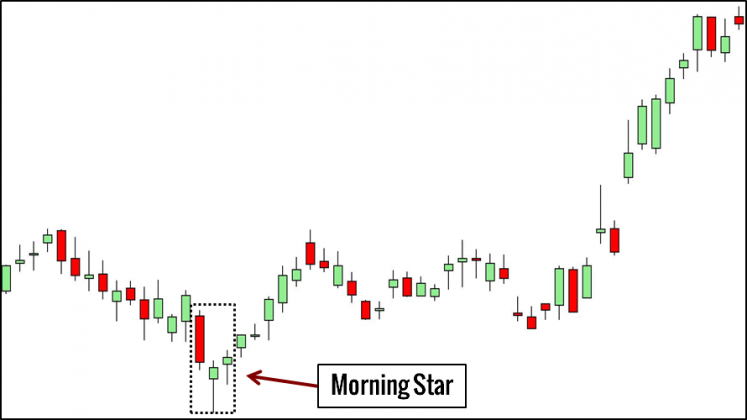 An Evening Star is a set of the following candles (in sequence):

2. A star above it (either bullish or bearish)

3. A bearish candlestick that closes within the body of the first candlestick

The Evening Star expresses the same logic. The first candlestick shows the bulls in control. Uncertainty sets in with the star candle. The last candlestick confirms the bearishness.

We apply both patterns to catch reversals as well as continuations.

1. Buy above the last bar of the Morning Star formation

2. Sell below the last bar of the Evening Star formation 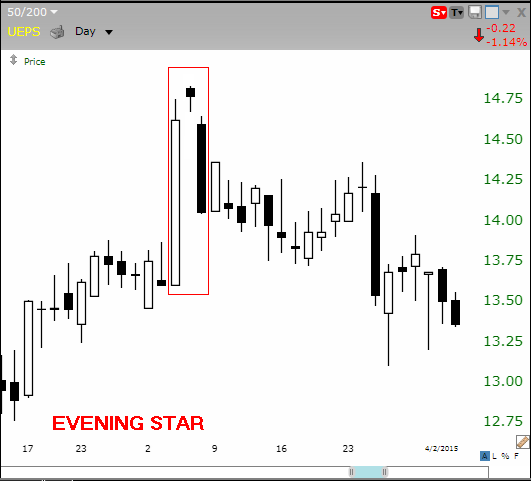 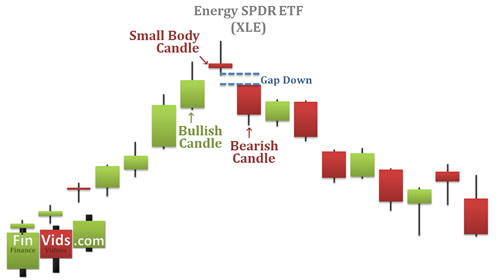 Candlestick patterns capture the attention of market players but many reversal and continuation signals emitted by these patterns don’t work reliably on the modern electronic environment. Fortunately, statistics by Thomas Bulkowski show unusual accuracy for a narrow selection of these patterns, offering traders actionable buy and sell signals.